Lawbreaker, don't you mess around with me

Advent Week Four-DIY and looking ahead

As we approach the end of the Advent season and near the beginning of Christmas, it may seem impractical to still be talking about different types of Advent calendars. During the final week of Advent, perhaps you can find ways to include some of these ideas into your present Advent traditions or get planning for next year.
Many modern Advent calendars don’t align with the Liturgical season of Advent but follow a design of “24-day countdown” to Christmas. And while Advent is in a way a “countdown,” from a theological standpoint, it is better viewed as a time to prepare oneself for the coming of Christ. Get a head start on Advent 2017 with some of these DIY Advent calendar ideas, with suggestions on how to adapt them into a more traditionally religious Advent calendar.
1) Envelope Advent Calendar- This envelope themed calendar can easily be modified to include daily scripture, quotes, or ideas for reflection. Choose themes such as hope, joy, love, and peace to help you and your family prepare for the coming of Jesus.
2) 25 Random Acts of Kindness Calendar- The holidays are an exciting and joyous time but there is often an underlying feeling of chaos and anxiety for many people. Take the time to spread some joy and kindness around with this calendar, creating a different idea each day of Advent. Another example, with a calendar template, can be found here.
3) Advent in a jar- Short on space? This DIY calendar is for you. While the instructions suggest adding daily messages and activities, you could also incorporate Advent scripture and mediations that help you and your loved ones partake in the journey of Advent.


Build Faith
Posted by C. Andrew Doyle at 9:26 AM No comments:

Are you the one we are looking for?

If you have ever had chocolate from an Advent calendar, you are aware that it isn’t exactly the best tasting chocolate out there. That being said, chocolate advent calendars are a fun way to countdown to Christmas.  While little is known about the origins of chocolate Advent calendars, President Dwight D. Eisenhower is often credited with the increased popularity of the Advent calendar in the United States. A photograph of him using an Advent calendar with his grandchildren was printed in several newspapers across the country during his presidency.
The popularity of edible Advent calendars has steadily increased over the past few Christmas seasons and there’s no telling what people will think of next. If you enjoy baking and cooking (or even if you don’t!), check out this Advent calendar from The Episcopal Church called Make Ready the Feast. Though the kick-off was November 20th, it’s never too late to start preparing yourself for the coming of Christ, via delicious recipes and the study of scripture. Happy cooking and baking! 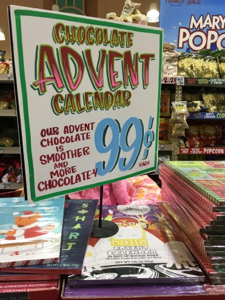 Stories like Grains of Wheat, Sermon for Anne Attwell Montgomery

The Advent Wreath is a long-standing tradition in many Christian denominations, including the Episcopal Church. Each church community has their own customs and practices regarding the use of Advent Wreaths. In the Episcopal tradition, the Advent Wreath is considered a “visual symbol marking the progress of the season of Advent” (BOS p. 30). However, there are no “official” guidelines regarding where the wreath is to be placed in the sanctuary, at what point during the service the candles are supposed to be lit, or the liturgy that should accompany the lighting of the candles.

Four candles are used in the wreath, representing the four Sundays of Advent. The candles are traditionally purple or lavender, but sometimes blue or red are used. Many churches choose to include a pink candle that symbolizes joy for the third Sunday in Advent, also known as Gaudete (Rejoice) Sunday. While not necessary, a white candle is often included in the center. This white candle is known as Christ’s candle and it is lit on Christmas Eve to symbolize the end of Advent and the beginning of Christmas. Other themes such as Hope, Joy, and Peace are sometimes associated with each week of Advent.

Many families choose to have Advent Wreathes in their homes, creating a space for reflection, listening, and prayer.  An abundance of resources are available for readings, prayers and other liturgies online and in the Book of Common Prayer and the Book of Occasional Services.


Check out this episode!

With the commercial holiday season starting in October, you likely don’t need an Advent calendar to remember that Christmas is coming. But since the 19th century, Christians have been finding different ways to embrace the coming of Christ. Advent calendars may now take on different meanings than they used to, but their simple roots and history make for an excellent reminder of why Christians used them in the first place: to celebrate the coming of Jesus.

Advent is the four-week period before Christmas, beginning on the Sunday closest to the Feast day of St. Andrew (nearest November 30) and ending on Christmas Eve. The word Advent means “coming” or “arrival” and it is during this season that the Christian church prepares for the birth of Jesus. As it is a four-week “waiting” period, Advent symbolizes the spiritual journey of waiting that many individuals, families, and congregations experience.

From traditional candle and wreath calendars to Lego or chocolate calendars, there is no shortage of ways to symbolize the coming of Jesus. The first Advent calendar can be traced back to the 19thcentury; Lutherans in Germany used to mark the days leading up to Christmas with chalk tally marks or even light a candle each day. Some were known to hang up a new religious image each day as well.  Though there is dispute on when the first printed Advent calendar was made, it is agreed upon that it is also a German tradition.

This Advent season, sign up for Anglican Communion’s Global Advent Calendar and join millions across the globe celebrating Advent. It's an excellent way to engage with people all over the world as you wait with joy and love in your heart for the coming of Christ.