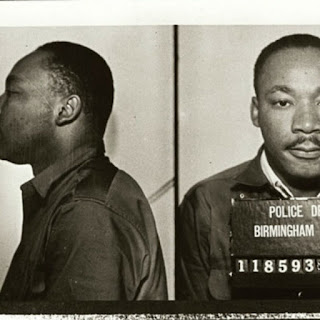 I have decided to do a few meditation blog posts on Martin Luther King's "Letter from a Birmingham Jail."

The Rev. King begins: "My Dear Fellow Clergymen." He writes to his fellow pastors. In this manner of beginning, he reminds us that we as pastors/priests are bound together. We are bound because we know this ministry. We understand the nature of pastoring and loving our people. We know the trials and burdens. King reminds us we are in this together and though we don't all have the same context we know what it means to carry and represent the burden of one's people.

Moreover, King recognizes in our common work for Christ and the Gospel that we have a profound impact upon our people and how they receive the Good News of freedom, love, and hope. He understood that not only are we bound by our vocation, but we are bound by a Gospel meant for all people. And, from time to time, good Christians have had to point out who was being hurt by the wider society. No sooner had Christ ascended into heaven than the first Christians are confronting the government for ignoring the widows and orphans in the distribution of food.

He continues with these words, "While confined here in the Birmingham city jail, I came across your recent statement calling my present activities 'unwise and untimely.'" A group of eight clergy who pastored in Birmingham wrote an open letter entitled "A Call for Unity." They did not like the fact that "outsiders" were coming in and speaking out about racism in Birmingham. His letter will be a defense of his actions. But here I wish to simply reflect that the status quo always argues, when it comes to human rights, that protests disrupt a peace. While Martin Luther King was a peaceful protestor the adversaries supporting racial discrimination were not. This PBS article reminds us of how peaceful protests were met violently by authorities. The newspapers carried headlines that echoed people's sentiments at the time, "Violence Explodes at Racial Protest in Alabama," and "New Alabama Riot: Police Dogs and Fire Hoses Halt March." The marches were indeed peaceful but met by violent police attacks, fire hoses, and dogs. I feel as though these patterns have repeated themselves today.

King then continues, "Seldom do I pause to answer criticism of my work and ideas." Here is an interesting insight into leadership. In his book Leading Change Without Easy Answers, Ronald A. Heifetz writes about how King's leadership as not too hard or not too soft. In this letter, we see that King is not impenetrable. He is leading, but he is listening too. He has heard an important group of people's voices - his fellow clergy. So he listens and he responds.

I wonder in that moment would I have signed the letter "A Call for Unity"? Or, would I have supported King? But there is the question today for us all who pastor our communities, faced with similar injustices and a need to lean towards each other. King reaches out to us, from this not-so-distant past, and invites us to lean in. I hear your worries and concerns he says...I imagine him whispering, "Lean in."

He continues, that he is responding not because they are complaints but because they are pastors like him. They are "men of genuine good," he writes. He believes their lack of understanding is true and he is unwilling to help and speak honestly about the situation. He writes, "I want to try to answer your statement in what I hope will be patient and reasonable terms."

As we pause here and ponder this introduction, I wonder will pastors/priests and leaders listen at this moment? Are we a people of goodwill, with genuine concerns, and willing to listen? Or, do we want the agitation to subside so we might return to a nostalgic past was only peaceful for some?

Good and gracious God, you invite us to recognize and reverence your divine image and likeness in our neighbor. Enable us to see the reality of racism and free us to challenge and uproot it from our society, our world, and ourselves. Amen. (by the Sisters of Mercy)
Find resources from the wider Episcopal Church here.