This morning began early. We had to all be ready for the bus to take us to the service at the Cathedral.  Yesterday I had been asked to preach at the service commemorating The Rev. Thomas Thompson and The Rev. Philip Quaque.  I thought it would be a little service; then a few of us would take the wreath over to his tomb and that would be that.

So here is the story in brief...The Rev. Thomas Thompson was an SPG missionary and he brought the Anglican Church to the Gold Coast during the slave trade era.  He essentially was a colonialist (SPG even had been given several plantations that profited from the slave trade).  It is REALLY a wild story.  So Thompson decides to take three eleven year old boys back with him to England to learn to be priests and then they could be sent back to spread Anglicanism throughout the area of Cape Coast.  Two of the boys died in transit the third was Philip.  He grew up in England, lost his tribal tongue and traditions and then married a white woman.  He completed his studies in England and he returned to the Gold Coast to start the church.  He was given a small room at the "slave" castle and a room from which to do services.  Just below the room were three dungeons housing over 1,000 men for shipping to the Caribbean and United States.  Philip had an awful time and really couldn't get much started; no one today is surprised. Beyond the slave trade issues, Philip's ministry was hampered by bad luck and a lack of funding.  Even his wife died in childbirth.  Philip did not give up though and did begin a small school.  Thompson (who had theologically defended slavery) and Quaque (who tried to do mission to a native population from a slave castle) are complicated figures in the least.

What was interesting is that as I would speak to our new friends here and I would say these two men are very complex figures in the history of this country and our own!  I would ask, how do you deal with the problems that flow through their narrative?  The answer was always the same.  Without Thompson there is no Quaque to bring the Anglican Church here, without them we might not be here.

The service was anything but small! There were a lot of people there. There were tons of school children for this is a holiday after they go to church.

We had a beautiful service.  I will upload my sermon; with translation.  And, some videos. Everyone was taking videos of the service...including the seminarians, so I joined in during the offertory.

When the service was over the Bishop led us out of the Cathedral and across the street to the slave castle where we laid a wreath at the tomb of Philip Quaque who is buried in the middle of the Cape Coast Castle compound.  It was truly powerful.  As I laid the wreath on the tomb I was so mindful of our own history in Texas with the slave trade and our part in participating in an abomination that is difficult to fathom and describe. 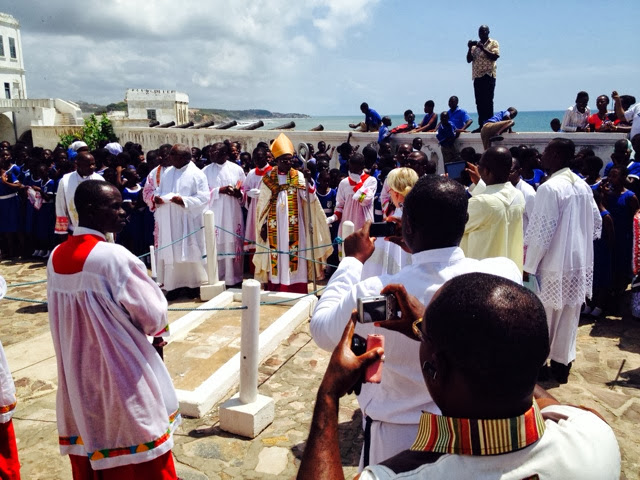 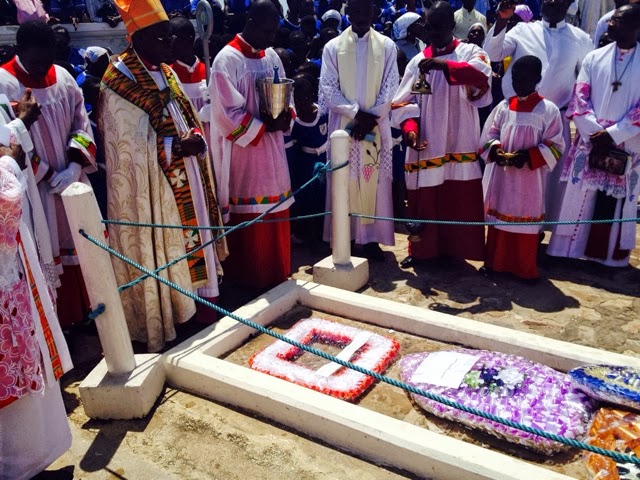 When the service was over our group received a free tour.  We started out with a video that described the world of Ghana prior to the arrival of the traders.  Then how the trading industry grew from gold and spices to people until it was a massive industry; the British, Portuguese, and Dutch even giving weapons to the people so they could be at war with one another and then turn their captives over to the slavers.  We then took a tour of the museum which was well done.

I wasn't allowed to take pictures. I will say that it was powerful and moving and sad.  One part of the museum was where we walked into a room that was built like a ship and learned about how the africans were crammed into the ship.

Then we walked out of that room onto an auction block - very moving indeed.  One of our group ask how many died and why did they keep doing it with so many deaths?  The answer was that, "Over half of the men and women taken into slavery every made it to an owner.  But the price was so high for the individual human beings that it remained a profitable export."

The castle was originally built by the Portuguese who lost it in war to the Swedes. The Swedes lost it to Norway and Norway in turn lost it to the British.  The British took over in 1664.  For over two hundred years they would house 200 men and women per cell rotating them out.

Estimates of the number of slaves transported from Africa vary from 12 million to 25 million – one estimate says that in 1700, at the height of the slave trade, more than 650,000 slaves were exported in that year alone – but whatever the numbers, they're huge, and most of these slaves came from West Africa and the Congo-Angola region. The trade started in the 1500s and over the next 300 years they were shipped out in what has become known as the African Diaspora, with one-third ending up in Brazil, one-third in the Caribbean islands and the rest throughout the Americas. The slave trade did not completely end until the 1870s, though Britain abolished its slave trade in 1807, signaling an end to Cape Coast's role in transporting slaves.

There were over 40 such forts across the coast of Africa, 30 were in Ghana. Two are within a 30 minute drive from one another.

After we were finished began to make our way through the castle.  We first went past the trading room where the slavers would bargain for the shipment, then we made our way through to the court and then the living quarters. 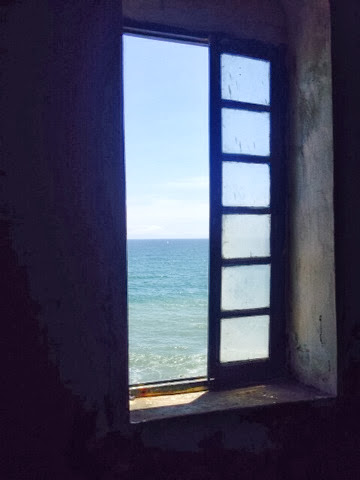 We then descended into the slave cells. 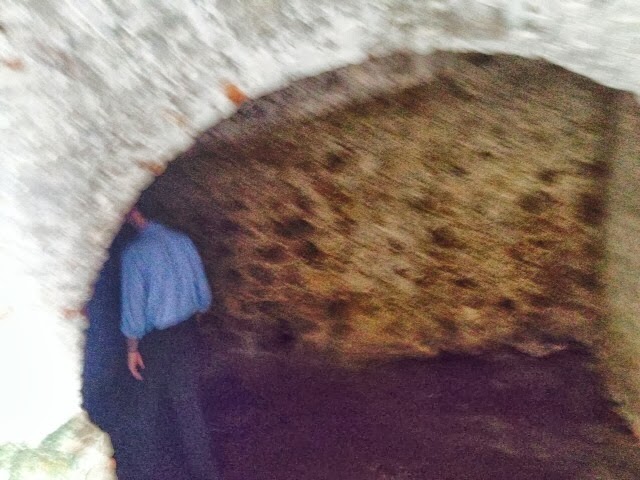 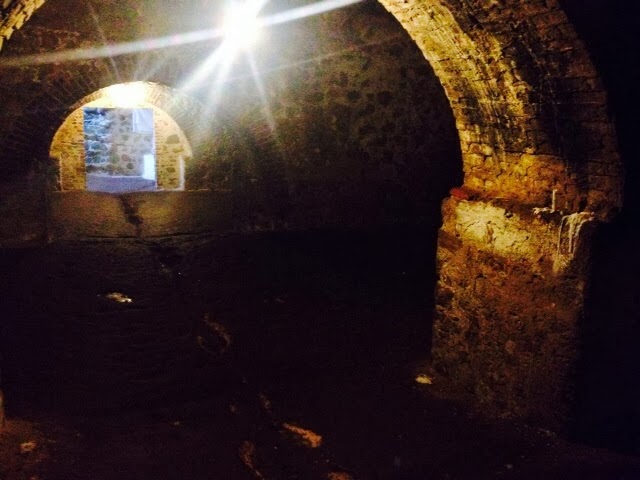 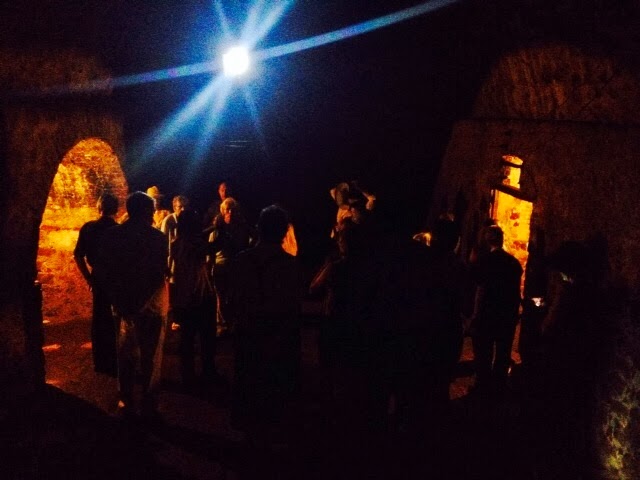 Only after excavating underneath the human waste in 1974 did they realize there was a brick floor beneath.

The men were taken through a tunnel to the front of the fort.  The tunnel began in this room which is the sorting room.  Only the strongest were sold; the others were left to die in the cells. The guide reminded us that the slave trade was not just about slavery but the control of the population still at home through the means of torture and terror.

We then went to the women's cells.  The cells were even worse for the women.  A greater percentage of the women died because of the illness and disease.

We then made our way out of The Door of No Return.  Here our pilgrimage walk ended. 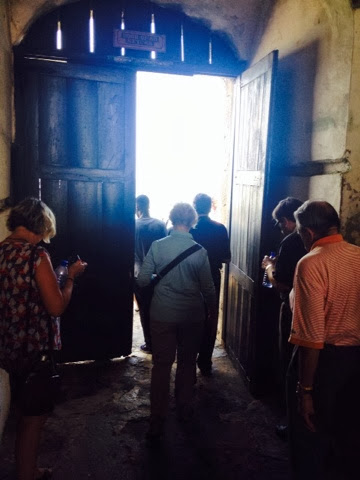 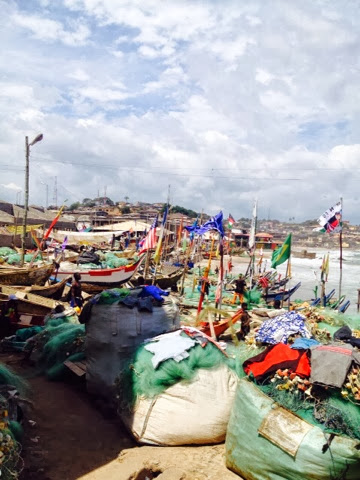 We paused together and prayed asking God's forgiveness upon us and all humanity.  We were surrounded by fishermen.  We were quiet for a long time.

The guide told us to look up and there on top of the door on the outside was written "the door of return." 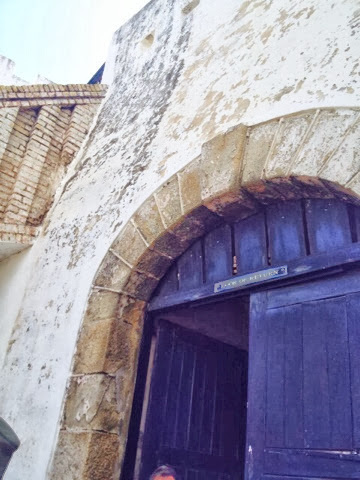 We were told that in 1974 people began to make their way back to Ghana from the islands and the US and South America...everywhere people settled after slavery, and, they would make their return voyage home...so it is here that I begin our journey home as well. 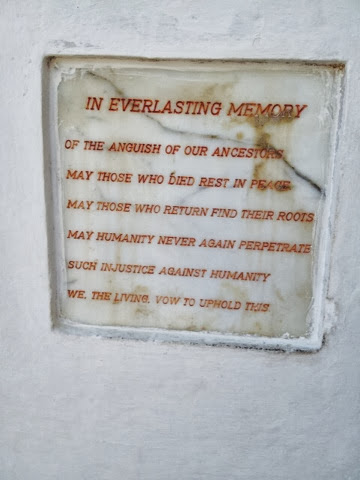 As I walked out I saw one of our members sitting and visiting and learning how to mend nets. 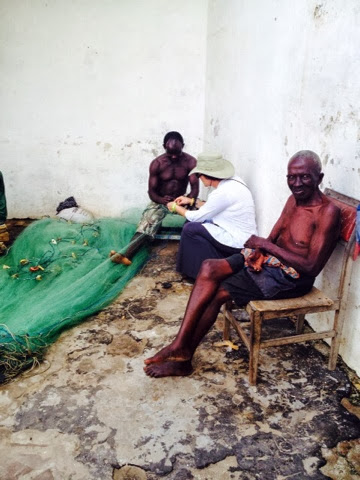